While operating in a sniper team, the Projected Clock method is one of the most effective techniques for a spotter to call targets to a shooter. 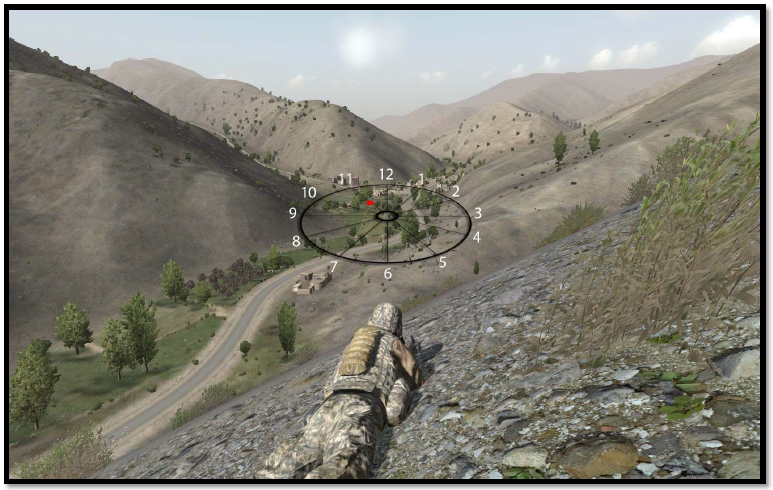 When a sniper team reaches their Firing Position (FP), the spotter designates what we call “The Clock”. This should be anything easily seen by the sniper and spotter, a centralized and permanent structure, and one that is taller or more recognizable by color/feature than other landmarks in the area. Think of it like a clock tower in the center of a town.

For the example shown above, The Clock is the building in the center and the red dot is an enemy target. The spotter calls something along the lines of “Target 11 o’clock, 50 meters off” and the shooter immediately knows the area of the AO the target resides, without panning endlessly across the battlefield (with tunnel vision).

Put the Projected Clock to the test!

Here’s another example: Let’s say the shooter eliminates that last target. Now the spotter could even use language building off the last engagement to form another call like “Target 9 o’clock from last kill…”

The key is to get in the mindset of projecting this shape out to the area that concerns the mission of a sniper team. Maybe you’re tasked with overwatch on a particular set of buildings along a road, or perhaps your team is to focus on a specific mountain pass enemies are known to travel through heavily. The sniper team could even choose to change the location of The Clock if need be, should the battlefield become skewed to one direction, but not so often that there’s confusion. Establishing a single Clock per objective or AO is enough.

The Projected Clock is not necessarily new, nor is it hard to learn. Chances are most mil-sim and FPS gamers will know how to refer to a clock direction or have at least heard it in a movie or book. This method is versatile, powerful, and can be understood by a variety of gamers, no matter the depth of their spotting experience.

Make the Projected Clock work for you

Allow the dialogue to be as efficient as possible and establish powerful walk on language. Grow skilled at gauging accurate distances even when viewing them at an angle. Standardize target and object descriptions. Develop common calls out of complex situations by adding on language such as “…from last kill” or “…from the chopper crash.” As a spotter, you’ll have to use your discretion as to what shared knowledge you know the shooter can understand quickly.

Using all these tactics in combination with each other makes for very effective sniper operations and why refining the relationship in the sniper team or unit is essential.

Kinda excited for Battlefield 2042 to release this fall.